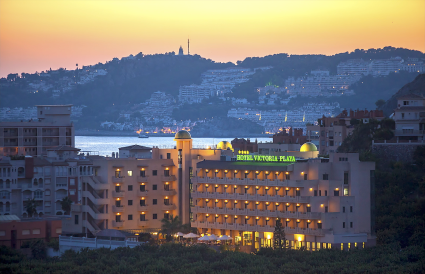 The Hotel Victoria Playa was not born out of nowhere. It is not the consequence of an occurrence, but of a life dedicated to work and love for Almuñécar and the Costa Tropical. The roots of this hotel are those of a whole generation full of dreams. The young Spaniards of the 50s wanted to start their own projects. Having their own business was a way of building themselves, leaving the past aside and, in addition, contributing to the development of the place where they had been born. The relationship of that generation with its people was so intimate that today it is difficult to find such intensity in the new generations.

José Fernández is one of these people. While still a teenager, hebegan working with his uncle Pepe in the now defunct "Yinch" Restaurant, located on Puerta del Mar Beach in Almuñécar. In addition, he worked in one of the most emblematic hotels of the Costa Tropical, the Hotel Sexi. This hosted people of the highest level of culture, in fact, singers like Rocío Jurado performed at its facilities. With all that experience, in 1964, and only 24 years old, he decided to set up his first hotel business: Pensión Victoria.

His dedication, his good work, his surrounding himself with good professionals and the presence of his wife, Lola, meant that by 1970, the business would have grown exponentially. So much so that that same year, he decided to open a second business, to return to do the same 8 years later. By that time, Almuñécar had also undergone a huge transformation, thanks to the sacrifice and work of dreamers like José Fernández and Lola. But work is not enough. To have success like this, it is essential to have good values. And José Fernández has always had them. Hospitality is about giving the best customer service. Even, we must anticipate what they want, to surprise them and find themselves better than at home. To achieve this, the human team that works for the project had to be the visible face of those values And he, the best example.

Today his message has penetrated so deep that Hotels Almuñécar is a leader in the sector, thanks to the Hotel "Victoria Centro", Hotel "Victoria Playa" and FIRMVN Restaurant, serious aspiring to become the first Michelin-starred restaurant in Granada. They seem like enough achievements for a 79-year-old man who has been working since he was a child. However, his imagination is just as alive.

It has all its energies placed on two very ambitious projects: a tourist apartment building in Almuñécar and a four-star hotel in Playa Granada. Close to him, works hand by hand, dedication by dedication, his son, José Andrés Fernández. This tireless hotelier has inherited a passion for good work and respect for the client, along with his desire to promote the economic development of the Costa Tropical. The Almuñécar Hotels team is proud to be part of a project that means so much to our area and, above all, that it treats us as if we were part of the same family that started it all.
Share |